Body Shaming Vs The Media 
Notice: Undefined offset: 0 in /home/customer/www/sallythibault.com.au/public_html/wp-content/plugins/seo-by-rank-math/includes/modules/schema/snippets/class-primaryimage.php on line 38

Body Shaming vs The Media

Body Shaming vs The Media

There is no doubt that the media, in general, can create a damaging, unrealistic impression to how a woman’s body should look.

The recent backlash on social media about the  ‘Are you Beach Body Ready?’Billboard campaign in London, sent Twitter and Facebook into a meltdown, with a change.org protest petition gaining over 70,000 signatures, and petitioners furious over the company’s objectification of a woman’s body.

The model pictured, Sydney sider Renee Somerfield is a strict vegan who works out 4 to 5 times a week and has said that, as a youngster, she was self-conscious about being lanky for her height she is 1.78m.  (or 5’ 10 inches for those of us who still don’t get what a meter looks like!)

Renee claims that her body was not airbrushed for the photo. However, that was not enough to calm the anger of thousands of women (and men) objecting to the way the company was promoting an unrealistic ideal of the so-called ‘perfect beach body!’

However, a poll taken over the furor showed that whilst some people were offended by the ads, others saw the campaign as a motivation to eat well and exercise more.

Whilst there were plans for a massive demonstration in Hyde Park in protest at objectifying women’s bodies yet again, only 40 predominantly young girls showed up to protest, who seemed rather chuffed at the media entourage, but perhaps did not truly serve the cause well. 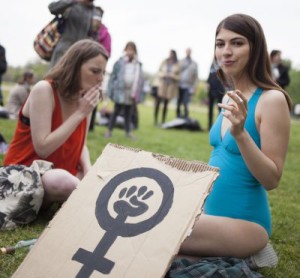 Consequently, Protein world has since posted that the advertising campaign boosted sales to  £1million . From a marketing perspective, the controversy was a success for the company, at least in the short term. 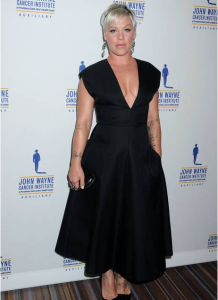 In a contradiction to the Beach Body backlash, more recently Pink was on the receiving end of criticism after a photo of her appeared in the media, where she appears to be carrying a little more weight, than in recent times.

Less than kind comments abounded on Twitter and Facebook, with people challenging her weight gain, and criticising her new ‘voluptuous’ look as irresponsible!

So on the one hand, whilst people were enraged about marketers exploiting irresponsible and unrealistic versions of a woman’s  body, when a woman appears in public, with less than what some perceive as the perfect body, social media goes into another meltdown with those criticizing her weight!

Whilst numerous research studies have shown that how a woman’s body is portrayed in the media can have an impact on how young people, in particular, perceive their own bodies, it is way more complicated than that.

A study carried out at the University of Wisconsin–Madison found that certain factors make some women more vulnerable than others to the effects of media exposure and that body image concerns are multidimensional and include thoughts, feelings, and behavioral responses related to one’s body.

In other words, our belief system about our body is impacted by numerous stimuli, and from various sources.

Our own body image can be a complex issue, that can be handed down from one generation to another, without us being aware of it.

My grandmother used to say that all the girls in our family had good child-bearing hips.  My mother reaffirmed the same belief to me, by saying it more times than I care to remember.  I just assumed that I was big boned and had good childbearing hips. Until the day I went into labour with my first child and experienced a 36 hours labour from hell followed by an emergency cesarean – because apparently, my hips are not wide enough to birth a 9lb 9oz baby!

What a shock to suddenly realise that a ‘belief’ that had been passed down from one generation to another was in fact not correct.

The interpretation and impact of any message comes down to what we believe about ourselves, usually formed from the beliefs passed down us by people who are important in our lives.

Recently my daughter reminded me of comment I made many years ago about how only certain people should wear short shorts.

Now, whilst I thought I was making a ‘mother knows best’ statement about what is and is not appropriate clothing –  that is not how my daughter interpreted it.

The real impact on our children’s belief about their body is influenced mostly by what we, as their mothers, believe about our own bodies. Often disguised as judgments about others.

In reflecting on my comments “that only certain people can wear short shorts” I have to ask myself the question – was that based on a belief that I wouldn’t look good in ‘short shorts?’ To be truly honest… probably!

When we come to terms with our own issues about our bodies and ourselves, it is that moment that we create real change.

I work with many women who are struggling to lose weight. More often than not their weight struggle has, at its core, issues relating to their parents, or significant people in their lives.  In my experience as a practitioner, never has a deep negative belief stemmed from an “ad I once saw.”

To focus just on the media as being the only primary influencer of a person’s body image is shifting the responsibility from one powerful influence to another.

The people who have the most impact on children are usually the people they love the most. Even if they roll their eyes, act like they are not paying attention to anything you say, they are actually intently focused on what you do.

So if we really want to change the way our children view their bodies – we need to look at how we view ours.

Ultimately, the ideal would be to instill in our children the ability to be able to shrug off any criticism at all.  Just like Pink’s response to the body-shamers on Twitter where she responded: “I think people have gotten it wrong, They think their opinion matters and I don’t know where or why they’re giving themselves so much credit.”

Whilst there is no doubt that the objectification of women’s bodies needs to be reigned in, the most powerful influence our children can have is us as parents. When we believe in ourselves and are comfortable with our own bodies, it is then we can pass that confidence onto our children – not just to say it – but to believe it!

If you are ready to release any negative beliefs that may be holding you back from being truly Fit, Fabulous and Free to be the REAL you, register now for a FREE Strategy Session with me to see if and how I can help you.